You have no Recently Viewed or Saved Vehicles.
Click here to begin your search.

You have no Recently Viewed or Saved Vehicles.
Click here to begin your search.

What a year! As we get ready to take a look back at 2020, we can’t help but be proud of our community, our company and of Ford itself. The new decade presented challenges that no team member at Ziems, or in fact the world, could have expected. But with each of those challenges came an opportunity to rise above, and rise we did.

On March 18, Ford, along with all other car manufacturing companies shut down its plants in an effort to slow the spread of the novel coronavirus. But the factories weren’t closed for long. In a matter of days, the manufacturing plants transitioned from building cars to manufacturing personal protective equipment, better known as PPE. Ford began producing face shields for the nation’s medical workers and then respirators for patients of the new virus. Ford also converted two of its resource centers into food distribution centers to help Michigan communities facing food insecurities.

Being part of the Ford family means being part of a history of helping. Throughout the year, Ford manufacturing plants, tirelessly designed and created PPE for hospitals across the world. Ford Motor Credit assisted customers with deferred payments. On a local level, Ford supplied over 7,500 face shields to San Juan Regional Medical Center and the Northern Navajo Medical Center in Shiprock. Throughout this crisis, Ford proved to be a leader and we could not be prouder to be a part of the Ford team than we have been this year.

For fans of Ford one of the most exciting events of 2020 was the return of the legendary Ford Bronco. The nostalgic off-roader returned in July, just as wild as its predecessor with two body options, and over 200 accessory add ons. Off-road enthusiasts rejoiced and the limited edition model sold out in less than 24 hours.

For the team at Ziems Ford Corners, the excitement is palpable. That’s because 2021 marks our 60th anniversary! A milestone we have been anticipating throughout this last year. As you know we have been collecting signatures on a brand new Shelby that we’ll be giving away as part of our celebrations, so stay tuned for that. We could never have reached this momentous occasion without the support of our amazing community here in Farmington. If you’re looking for a new car or truck in the new year, be sure to contact us to see how easy it is to find yourself a new ride.

At Ziems Ford Corners, we know this holiday season will be unlike any other. In light of the current rise in COVID-19 cases, we would like to first say our thoughts are with those affected by the virus here in our Farmington community. We realize that for some of our customers, neighbors and friends the holidays may be difficult. This year many of us will be missing the comfort and joy of gathering with friends and family while participating in holiday traditions.

A Message of Support

As we navigate through these challenging times, we are reminded of how fortunate we are to be part of this strong New Mexico community that supports one another to accomplish great things. From our wonderful businesses that have adapted to new ways of doing things to our heroic first responders and medical staff on the front lines each and every day. It is the power of this strong relationship that will propel us through to better times.

As We Move Forward

At Ziems, the well-being and safety of our team, clients and community members are our top priority. As we closely monitor the evolving impact of the pandemic, we are implementing ongoing measures to ensure the health and safety of our staff and customers. We keep up to date with the guidance of state and local authorities as well as the CDC and we will continue to adjust our guidance accordingly. Please refer to How Ziems is Navigating the COVID 19 Outbreak for the most up-to-date information.

This year, instead of simply wishing you a Happy Holiday, we wish you endurance, strength, health and as much happiness as you can bear. And, if a new Ford car or truck is on your Christmas list this year, contact us at Ziems Ford Corners, or shop online and we’ll help Santa get it wrapped up for you. From our family to yours we hope your season is filled with health and happiness.

It’s been a long road, but this Monday, Ziems Ford Corners in Farmington, New Mexico is re-opening! During this time, the safety of our customers, staff and the community is our highest priority.

We are following all COVID-19 safe practices outlined by both the CDC and the WHO. In an effort to comply with all health regulations and keep both customers and staff members as safe as possible, we made a few changes to daily operations.

Some Things are Changing 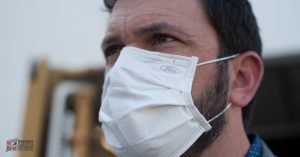 Somethings Are Staying the Same

If you prefer contactless shopping, you can shop online 24 hours a day. We still provide pick-up and delivery for service customers as well as remote delivery. It is our goal to accommodate all folks who are not comfortable coming to us. For those that want to see us in person the hours of operation are: 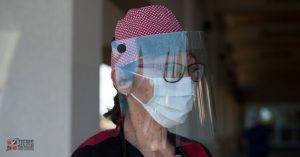 With Ford comes a history of helping. It starts at the manufacturing plants, who have been tirelessly designing and creating PPE for hospitals across the world. It carries on to Ford Motor Credit who has assisted current customers with deferred payments, on to our local region where Ford has supplied 7,500 face shields to date to San Juan Regional Medical Center and the Northern Navajo Medical Center in Shiprock. Ford has been a leader throughout this crisis, and we could not be prouder to be a part of the Ford team.

We Can’t Wait to See You

Ziems has been your local Ford Dealership for the last 60 years, and we intend to be here for many more. As we reopen, we know that many of our other local businesses are still struggling. With that in mind, we want to give the economy in our community a boost. That’s why we decided to give our customers $200 cash in their pocket to spend at local businesses when they buy a car or truck from Ziems in June.* If you’re ready to for a new or used car or truck contact us today. We can’t wait to see you at Ziems Ford, 5700 East Main.

* Disclaimer: AXZD plans are not eligible. One per household.  See dealer for details.  Ends June 30th.

The last few weeks have brought a whirlwind of changes and fast-acting responses from Ziems Four Corners. As a community and a nation, we have made rapid adjustments to a new normal almost overnight. We couldn’t have done it with such aplomb without the backing of an incredible community and an amazing brand.

Today we stand Ford Proud at what our brand can do. Building on practices developed through years of assisting communities during times of need, Ford is partnering with prominent names across multiple industries to help a nation affected by the developing coronavirus outbreak.

At a Stand Still

On March 18, Ford along with all other North American car factories, suspended vehicle manufacturing and production. In the century-plus history of the auto industry, this has never happened. Factories were silenced. Workers were sent home. Our nation is gripped by uncertainty. 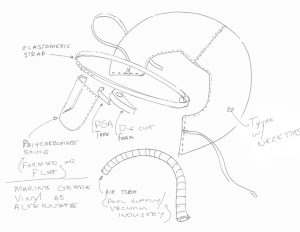 A Call for Help

On March 19, a plea came in from the Mayo Clinic and Ford Motor Company executives issued a call to action. In mere hours, Ford made the decision to shift gears from manufacturing cars to manufacturing medical devices. It assembled a task force to determine what could be made quickly. The first to act was a team from the “human-centered” design shop within Ford called D-Ford. Within a week, a small team of designers was in the midst of collaboration, reviewing plans, designing and testing prototypes and meeting with doctors. After seven days, start to finish, the team at D-Ford was able to switch from creating high-tech cars with robots and artificial intelligence, guiding the way to old-fashioned hand assembly of medical equipment. In the Detroit factory today, workers are producing medical face shields at a rate of one million units per week – each and every one of them by hand. 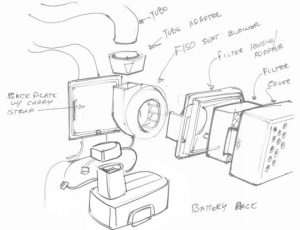 On March 24, Ford detailed the additional measures it is undertaking to support a nation under stress and announced plans to partner with GE Healthcare, UAW and 3M to create a simplified respirator mask, ventilator designs (shown above) and additional PPE components. With face shields already under production in a collaboration with UAW and plans in place to increase the volume, Ford turned its efforts to other projects.

Partnering with 3M, the Blue Oval is manufacturing at scale Powered Air-Purifying Respirators (PAPRs). The two are collaborating on a new design and leveraging parts from both companies to meet the urgent demand for first responders and health care workers; Ford is exploring the production of the new PAPR in one of Ford’s Michigan manufacturing facilities, helping 3M boost production potentially tenfold.

In its partnership with General Electric Health, the two companies are working together to expand the production of a simplified version of GE Healthcare’s existing ventilator design, as well as providing components from their parts bin to build other respirators. The design released by Ford (top) will use 3M filters that draw air into a blower motor sourced from an F-150 and then pushed through a tube up to a mask that is sealed to the user’s face. Highlighting once again, the value of the F-150 product line.

Other Acts of Kindness

However, Ford Manufacturing isn’t the only branch of the automaker’s company that is getting involved. Its finance branch, Ford Credit, is encouraging customers in the U.S. impacted by COVID-19 to contact them to discuss optional delayed payments. It is offering a program giving customers who buy new vehicles at this time the option to delay their first payment for 90 days. Customers are encouraged to access their Account Manager profile either online at www.accountmanager.ford.com or through the FordPass app; visit www.fordcreditsupport.com or call the hotline to discuss options at 1-800-723-4016.

Ford’s philanthropic arm, The Ford Motor Company Fund, is directing more than $500,000 to nonprofit groups in southeast Michigan to support the delivery of food to both senior citizens as well as children who no longer have access to school meals. Another way Ford is helping is by converting two of its Ford Resource and Engagement Centers in Detroit into drive-up food pantry distribution centers. Ford Fund is also supporting Detroit-area nonprofits that provide shelter to families and other at-risk people. In addition, they are exploring how employee volunteers can assist other nonprofits that are short-staffed.

“This is such a critical time for America and the world. It is a time for action and cooperation. By coming together across multiple industries, we can make a real difference for people in need and for those on the front lines of this crisis,” said Bill Ford, Ford’s executive chairman. “At Ford, we feel a deep obligation to step up and contribute in times of need, just as we always have through the 117-year history of our company.”

Here at Ziem’s Ford Corners in Farmington, the Ford brand has once again shown us what it means to be Ford Proud. We are eager for the day that we can see you all in person again, but until that time arrives, online shopping is always open, as is our service center. Stay strong New Mexico.